Last week's feature announcement got 10,000 views thanks to Hacker News. (Note to self: write more posts about RSS). We went from 199 subscribed users to 377. 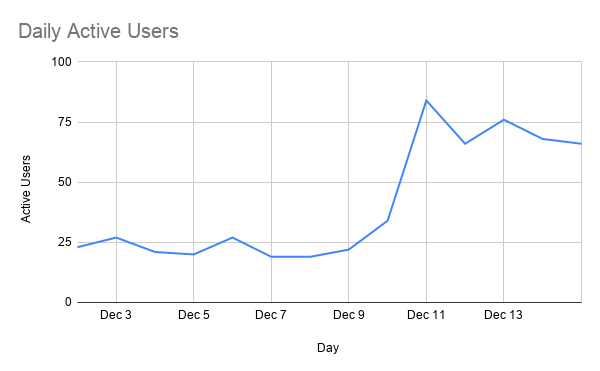 So I'm quite happy about that. Thanks everyone for signing up!

I'd like to start conducting short (20 minute) user interviews. I already have a survey that gets emailed to new users after about a week* which asks a couple simple questions about features. With these interviews, instead of talking about features, I'd like to learn more about you, how you currently consume information, what problems you have, etc. If you're willing, submit a feedback message on the settings page and say "I'm down for Zoom" or something.

*Fun fact: it turns out that until a few days ago, the survey was actually getting sent to brand new users. So a nice chunk of our new people from last week think I'm a dufus. My favorite survey response answered each question with "I signed up less than 12 hours ago and received 1 email with 5 suggestions. I have no idea."

That being said, I do of course have a big list of things I've been thinking about implementing. Except for the first one, these are all speculative. If you have an opinion, let me know.

Kind of like how Jeff Bezos says Amazon customers will always want lower prices, improving Findka's recommendation algorithm will always be a priority. The main thing I'd like to do next is active learning: when a new user signs up, the algorithm should strategically pick essays that will help it learn the most about the user's preferences. For example, if Findka sends you an essay that everyone loves, we probably won't learn much about your preferences. On the other hand, if we send you an essay that 50% of people love and 50% of people hate, we'll learn which camp you're in.

I'd like to add at least two manual levers. First, each feed should have two possible modes: "sample" and "recent." Sample is what I've just described; it's the default. (By the way, it'll include articles from the RSS feed's backlog). "Recent" mode will be more traditional: we'll send you all the articles that have been published since your last Findka email. These won't count towards the number of links you've opted to receive per email (5 by default).

Second, for sampled feeds, you should be able to set the sample percentage. The default will be "auto" (i.e. the sample percentage will be controlled by the bandit algorithm), but you could instead set e.g. "20%" for a particle feed. I'll include this option for Findka's algorithmic recommendations too: instead of them taking up 50% of your emails, you could choose some other percentage.

I could publish an RSS feed that contains the articles we email you. To collect ratings, I could insert some links for "favorite", "like" and "not interested" into the article's body. For one, this would obviously let you consume Findka from an RSS reader, but it could also open up fancier possibilities too, like reading from a Kindle.

In general, if you want to consume Findka in a particular way, you'd be able to make it happen without me having to add more features (and then I'll have more time to improve the algorithm!).

4. Publish your favorites as an RSS feed

Another fun fact: some of your recommendations are picked randomly from essays I've favorited myself :). It turns out that this strategy, uh, actually performs pretty well against collaborative filtering so far (though for the past two days, CF has been pulling ahead).

Anyway, it'd be cool if anyone could publish a feed with their favorites. And we've already got UI for subscribing to RSS feeds—I could throw in a "suggested feeds" box that recommends other Findka users to follow.

(This'll be opt-in of course; I won't publish your favorites unless you request it.)

This might even be a decent growth strategy: Substack for curators. It'd be a super easy way to publish a newsletter with articles you like. We could provide a landing page/subscribe page that you could link to on social media etc.

If we start letting people publish their favorites, another cool extension would be letting you publish multiple feeds of favorites for different types of articles. For example, I'd love to make a feed of LDS rationalist essays (a pretty narrow niche, sadly), but those won't be on-topic for most Findka users.

We could implement this with tagging. When you publish a second feed, you'll get the option to tag articles with that feed. Perhaps you could tag your incoming RSS feeds, so if you favorite an article that came from a cheese blog, it'll get included in your cheese favorites feed.

If other Findka users follow you, they could also suggest articles for the niche. Perhaps when they submit an article to Findka, there would be a checkbox that says "Angela's cheese feed." We would then mix those articles into your regular emails (algorithmically, of course, so we'll counter spam).

This would be kind of like subreddits, but without the talking-to-other-people part.

We could import your bookmarks from Pocket or whatever and then mix those in with your emails.

I had a Zoom call a few days ago with someone who suggested making a Telegram bot that would post articles and send back the emoji reactions. I had never thought of that; it sounds awesome. It might be an alternative to the "niche articles" idea above—if you want to make a community around a certain topic, just make a channel and include the bot. We'd need to figure out how exactly to source articles. I'm thinking we'd let the channel admin/channel participants submit articles and RSS feeds and pull just from those. Perhaps we'd pull from Findka's main pool of articles if there are some that are similar to the ones the channel participants submit.

If I do this, I'll probably make a Slack bot too.

This is much more vague—but I think Findka could become a stream processing tool for end users. You can think of it as a not-very-flexible stream processor already: it has sources (RSS feeds and Findka's recommendations), it aggregates those into a new feed, and then that feed goes into a sink (email). Several of the features above fit into this framework nicely. For example, publishing your favorites just means adding a filter and an RSS sink.

Gradually, I want to add more types of computation and let you compose things however you want. The best example use case is probably notifications: the current state of the world is absolutely terrible. With Findka-as-stream-processor, you could set up sources for everything you might want to be notified about. You could assign priorities to different kinds of things, and you could control how those notifications are delivered. They could be sent to a sink for push notifications immediately, or they could be batched a few times per day, or they could be sent to a web page that you check manually.

As Airtable is to Postgres, Findka could be to Kafka.

I don't write this newsletter anymore but am too lazy to disable this signup form. Subscribe over at tfos.co instead.